Being a gardener, over the years I have been given, or have bought for myself, numbers of calendars that feature pictures of gardens. While admiring the monthly scenes, I noticed something annoying — not all of them were appropriate for the month in which they were featured. Because some of the calendars are quite beautiful I have kept them, so have a few examples at hand. Most egregious in this seasonal discord is a 2009 calendar entitled Country Gardens with photography by Adam Gibbs. The photographs are quite splendid, depicting scenes from the Morrisburg, Ontario garden of Jeff Arsenault, the self-styled “Frugal Gardener.”

January features, among other things, a white mullein (looks like Verbascum chaixii, but I could be wrong), which normally blooms in July. February shows a birdbath turned into a planter, overflowing with petunias, lobelia and other annuals, with a daylily at its feet, and lupins peeking out from behind a big sedum (possibly ‘Autumn Joy’ ) in bud. In April, we see some roses and alstroemerias in magnificent bloom. For December there is a lovely picture of red petunias with a red astilbe and lots of green foliage.  At least the colours are seasonally appropriate, in a way.

Now, there’s no law that requires garden-themed calendars to show scenes from the months they represent. It’s quite possible that the people who put the Country Gardens calendar together had no such intention. It could be that all they wanted to do was to show Mr. Arsenault’s garden at its summer best. If that was the case, they certainly succeeded.

But gardening is so tuned to the seasons, that it’s only appropriate for each of the pictures in a garden calendar to match its month. A calendar that features cats or cottages or shoes doesn’t demand this seasonal fidelity, although even those would likely show a cat sporting a Santa hat in December, a cottage fronted by tulips in April, and a shot of sandals, rather than fuzzy slippers, for July.

I have before me now three calendars from 1996 through 1998 that featured gardens from my part of the world. These hewed closely to the seasons, for the most part. Two Januaries feature snow scenes (although we can get snow here in November and even in April, or not at all), and one shows bergenias and oriental hellebores. Crocuses in February, daffodils in March, the obligatory rhododendrons in May. There is even a rose and alstroemeria pairing, but this one is in July. Quite appropriate. My only quibble with these calendars is that every one of them has an out-of-season scene for the month of December — all three appear to have been taken in July or August, judging by the lilies (including callas), salvias, Echinacea, roses, chives, hollyhocks and yes, another Verbascum chaixii. In December. I can only guess that the intention was to remind the gardener, in the darkest month of the year, that summer will come again.

This small annoyance inspired me to resolve that if I ever put together a calendar with photographs from my own garden, each scene would actually be from the month with which it is paired. The challenge would be to find something visually pleasing to feature every month, even in November, December and January.

I acquired a digital camera in October of 2009 and immediately began compiling a series of garden photographs. When I started this blog in May 2010 I posted a few pictures every month. By late fall I had enough to put together several calendars. But I didn’t. I had good reasons for this lapse, but the reasons don’t matter. The fact is that despite my intentions and all the great pictures I’ve gathered, I haven’t gotten around to selecting twelve of the best and creating my own garden calendar for 2011.

Not yet, anyway. With luck, I will manage to get this project done in January. In the meantime, here is a scene from December of 2009, full of the green of hope. 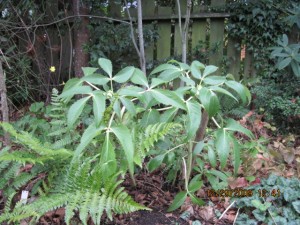 Update to this post:  I got my own Truthful Garden Calendar out on January 2, 2011. The final product arrived by January 15. It includes some of the photos I posted here through 2010.