A couple of days ago I finally deployed some really nice plant ID markers that I was given last Christmas. Since there were only 20, I decided to use them to mark plants I would hate to lose, but which are threatened by nearby tough, pushy plants. I walked around the various beds and made a list of possible subjects, then narrowed it down to 20 and made up the labels. Written on with pencil, they are reusable and correctable, which is a good thing. 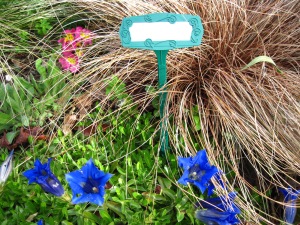 I couldn’t always remember the names of the plants, not well enough to write them out, anyway. It’s like names of people you know; they may be friends of many years’ standing, but you can’t spell their surnames correctly without looking them up. That is especially true of botanical Latin (and of course I had to use it to demonstrate to anyone that happens to see these labels that I know my stuff).

So I turned to a beat-up notebook in which I’ve written down garden notes for the past 20 years — mostly lists of things to do and helpful hints gleaned from various books, but also lists of plants purchased and seeds sown. And there’s that pile of old nursery catalogues, many of which contain long lists of Plants to Order, and packing slips showing which ones were actually ordered.

I found the information I needed, but the whole experience was a stroll through the garden’s history — list after list of plants, many of which are long gone to a better world. That Itea virginica purchased in June 1994, for example, perished after a few years of struggling along in my dry, sandy soil. Cosmos atrosanguineus, the chocolate cosmos (the flowers really do smell like chocolate), acquired with great excitement in 1998, is now long dead. At least it bloomed before it gave up, unlike a white fireweed (Epilobium angustifolium “Album”), which never settled in here. (The common purple variety comes up regularly all over one of my perennial beds). Another total failure was Rosa chinensis “Mutabilis,” which croaked while still in the pot it came in. I think I got a refund for that one, but I still regret it, because descriptions of it sound delightful. I see that I tried a couple of types of blue Corydalis — “Blue Panda” and something called “Dufu Temple Form,” which I vaguely recall as more purple than blue. They are now gone (but the ordinary yellow Corydalis lutea is firmly established and spreading). And finally, there are a few things I don’t even remember. Anemonella thalictroides? Something that has qualities of anemonies and of Thalictrum? It must have died neatly and quickly, leaving no trace in my memories. The saddest thing is that the nursery from which I bought most of these plants is gone too — either out of business or at least out of the retail trade. I still have copies of all their catalogues from 1994 to 2001. Looking at them, I remember my twice-yearly visits to the place, returning to my garden with new plants and new hopes.

On the plus side, many of the plants in my notes and listed in those old packing slips are still alive and thriving, or at least surviving. Euphorbia characias “Humpty Dumpty” is a big, fat thing in full bloom right now. The Dryopteris ferns I bought in 1994 are sending up fiddleheads yet again. Hosta tardiflora bloomed last October, and I hope will again in future Octobers, having survived being chomped by the deer that visited the garden a few weeks ago.

That’s the thing about gardening in the same place for many years. Plants come and go; some succeed, others fail, quickly or slowly, depending. Others do well and become part of the furniture of the garden, only to vanish suddenly in a hard freeze or a worse than normal drought, shocking the gardener who took them for granted. But if not for all those records — scribbled lists, packing slips, records of seeds planted — I would very likely have forgotten a lot of this stuff forever. Remembering those vanished plants (most of them, anyway) reminds me of how rich and complex the life of a garden is, even a small and modest one like mine.