It has just started to rain a little too hard for working in the garden, so I decided to write this post instead. I’m certainly not complaining about the rain, though. In this part of the world rain pretty much fizzles out by June and doesn’t reappear until September, or at least (if we’re lucky) late August. As a gardener, I envy those who garden in places with summer rain. “Summer rain” — those two words have a magical quality for me. So rain in late May is something to rejoice about, especially in this rooty little patch. It’s predicted to continue tonight and all day tomorrow.

I just planted a Lobelia cardinalis “Queen Victoria” — very suitable, since this is the Victoria Day weekend — in the tiny bog that adjoins my pond. A few weeks ago, I dug out most of a huge plant of sedge (Carex something or other) that used to be variegated but lost most of its variegation in the course of becoming enormous. Removing it cleared out an entire square foot of space in soil that is perpetually moist, an exceedingly rare thing around here. Yesterday evening I purchased “Queen Victoria” as an impulse buy at the grocery store. So much for careful planning and “garden design.” Even at 4 inches high, her dark red foliage looks great next to the bright green leaves of a marsh marigold and an astilbe. I hope she grows and prospers, eventually producing scarlet flowers.

Another new acquisition waiting to be planted is Gaura lindheimeri “Cherry Brandy,” which I bought as a replacement for a couple of pink gauras that inexplicably died in the winter of 2010-2011. Those were a variety called “Siskiyou Pink.” “Cherry Brandy” is supposed to be compact and suitable for the front of a border. I had a spot picked out for it months ago. A plant of Lychnis coronaria would have to be removed to accommodate the newcomer, but that was OK because I have lots of those, and (in late winter mode) it looked pretty scruffy. Well, now it has new foliage and is getting ready to bloom, which makes it nearly impossible for me to dig it up and put it in the compost. So now I’m considering a spot that will involve removal of a young plant of Eryngium giganteum (of which I have way too many), a chunk of some carpet-like sedum, and a plant of the common sweet violet, which is a near-weed and right now getting that scruffy past-its-best look which almost invites planticide.

Sadly, I have not much good to report on the blue poppy front. My original plant of Meconopsis “Lingholm” is opening a single small bud, which may be it for this year. I’m pinning my hopes on eleven young plants, seedlings of “Lingholm” that I planted in a new bed on the north side of a big lily-flowered magnolia. They seem to be settling in quite well, despite recent strong west winds that wrenched off a few leaves. I hope they will bloom next year. I have pretty much given up on growing Meconopsis in pots, after losing just about all of the dozen or so plants I potted up a few years ago. The crowns succumb to rot, and that’s that.

Finally, I can’t say that the ex-vegetable patch is making a successful transition to anything but a weed patch. However, the weeds are of a better quality than they might be — self-sown California poppies, snapdragons and Verbena bonariensis. Also an arugula plant in full bloom. I think arugulas could be grown by discerning gardeners as ornamentals, because of their elegant shapes and the unique beauty of their white flowers. 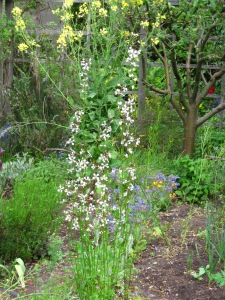 Arugula in bloom; borage and kale in the background

According to the weather radar on Environment Canada’s website (one of the best things about the internet, in my opinion), the rain is about to let up for a while. Time to plant that gaura!