Technically, I suppose midsummer is actually the second week in August, but to me August feels like late summer.  Mid-July is high summer, when the ornamental garden pauses at a peak (hopefully) before starting a decline into its tired, seedy late summer state. Vegetable gardens, on the other hand, at this stage should be showing a promise of harvest.

Ha (as Henry Mitchell used to write). I no longer have a vegetable garden, and the tomato plants in their pots do not look promising. There aren’t even any little green tomatoes, although the wretched plants have actually started to bloom. This is amazing when you consider that they spent the last few weeks swathed in a set of old lace curtains, looking a bit like wistful brides whose grooms have failed to show up. I resorted to this rather desperate measure after I realized that the neighbourhood buck (or some other visiting deer) has a taste for tomato foliage.

Deer, whether a single one or several, have certainly made their presence felt this summer. I don’t think they come here for their main course, but definitely for dessert or appetizers. Flower buds are a favourite. Lilies were ignored until they formed visible buds, at which point “Golden Splendour” was quite thoroughly disbudded. Granted, it hadn’t been as vigorous as in former years (when it had more than 30 blooms), but an early count promised about 20. Now there are only two buds left, because I swathed them in lace as well. No daylilies will bloom here this summer, or Phygelius either. Hosta buds have been nipped, and even the small, dark red flowers of Potentilla atrosanguinea have been sampled. Ditto alstroemerias. The big blue hardy geraniums, Geranium pratense, bloomed well, but have since lost most of their leaves to the visiting ungulate. 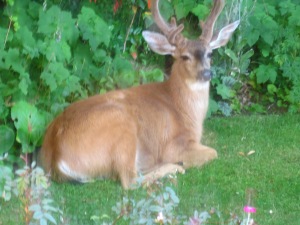 The funny thing is that a casual glance over the garden fails to reveal these losses. Because of the cool, damp spring, things still look pretty lush, and the tough plants, knowing a good season when they feel one in their tough little tissues, are revelling in it. Only the gardener knows for sure that all is not well. 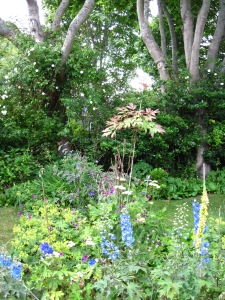 The gardener, these days, is run off her feet doing things only slightly related to gardening, namely painting a new gate, an old gate and a set of refurbished porch steps. The first step, of course is priming, with an oil-based primer that has left leprous-looking spots all over my hands. But while applying this stuff to the new gate, which also includes an arch, I’ve been considering what clematis to plant as an arch-adornment. I’m thinking that Clematis viticella “Julia Correvon” might be the one, or perhaps some other member of the viticella group, because tree roots are a problem in  this spot, and the viticella clematises are reputed to be fairly tough. But I have a few more months to think about this before planting time next spring.

Another recent worthwhile garden project was lifting a set of stepping stones from under accumulated soil. I’m still amazed that I lost sight of them to the point that they had to be dug up and reset. Now that they are visible once more, the path they demarcate looks mysterious and inviting once more.

The Path Behind the Pond

And the weather?  Well, we had a taste of summer for the last week or ten days, with temperatures in the mid-20s (mid 70s in Fahrenheit). But after a doozy of a thunderstorm on Friday night, things reverted to cool and damp — just in time for the painting project. C’est la vie.