This year I’ve had an opportunity to find out just what deer like to eat. Like people at a buffet, they don’t always want the same things every time they visit the garden. Over the past six months, I’ve noticed some patterns.

In early spring, tulips are a big winner — buds, flowers, stems and leaves. One of my plantings was eaten down to stubs, so I don’t know if they will appear next spring. Fortunately, these weren’t tulips I really cared about; species tulips, incidentally, such as T. tarda and T. batalinii, were either overlooked or aren’t as tasty. Bergenia bloom stalks were all eaten. New leaves and flowers of epimediums were sampled. Even Centranthus was nipped, as was tender new growth on roses and spireas.

Later in spring and in early summer, I got the impression that deer were getting more selective and that most of my largely drought-tolerant perennials weren’t to their taste, but the few pea plants that I bothered to start in my ex-vegetable patch certainly were. If I try growing peas or beans again, they will have to be netted. Alstroemerias were popular during this period, and peach-leaf bellflower, which was deadheaded quite neatly by visiting deer.

At the end of June, almost all the buds on lily “Golden Splendour” were eaten, leaving only two. I quickly deployed an old lace curtain to protect them, so actually had the wonderful perfume of this lily for a while in July. The thing is that deer pretty much ignored lilies until they had swelling buds, which must be a delicacy. About this time I had to forget about daylily blooms and hydrangeas, as all the buds on those were eaten. 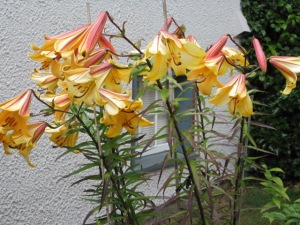 A deer with a taste for tomatoes must have cruised by early in July. One plant was reduced to a stump. The rest got the lace curtain treatment. It was such a crummy spring for tomatoes that I was determined to salvage what I could. Right now I actually have quite a few tomatoes the size of tennis balls, but as yet totally green.

Things were quiet until we got some genuine summer weather in August, when fresh vegetation grew scarce, and plants that were ignored until then suddenly became delectable. That’s what happened to my hostas. There was a bit of nibbling in May, but nothing major. Last week, however, the big green and white variegated hosta that lives in a pot near my pond was quite thoroughly eaten. 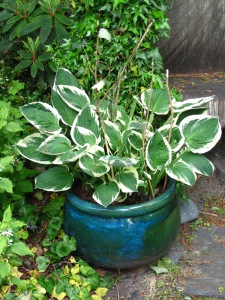 …but this is all that’s left.

Despite the above, I’m not of the Something Must Be Done About Those Deer school of thought. Certainly not the crude and ugly option of a “cull,” for a variety of reasons I won’t go into here. But gardeners do have a few options. Don’t grow plants that are real deer magnets, or if you do, be prepared to see damage. Learn what deer like at different times of the year and be ready for them. I plan to acquire some 1/2″ netting to drape over especially susceptible/desirable plants such as lilies and hostas. The lace curtains worked quite well as deer deterrents, but they do look rather peculiar. Netting would be more discreet but just as effective, I suspect. Deer that have lived since birth in urban environments aren’t deterred by human smells, but getting a mouthful of netting when you’re expecting tender greens will likely put them off.

Even delphiniums were sampled in this last round of damage, probably because the plants had started to grow fresh foliage and I had cut down the old ratty stalks, thus allowing access to the new leaves. It’s probably best to leave those old stalks in place, even though they are an eyesore.

As yet, deer have shown no interest in the blue poppies, which makes it easier to maintain a philosophical attitude.