I thought this was a goofy idea when it first came to me, but recently I heard two of the authors from this year’s “Canada Reads” competition talking about playlists for their books — Joseph Boyden about The Orenda and Kathleen Winter about Annabel. What’s OK for these Can-Lit stalwarts is OK for me.

Certain pieces of music inspired me while I was writing the four novels of my Herbert West Series and some made their way into the plots of these books. Novels should create mind-movies for their readers, and these musical works could be the soundtracks.

While writing The Friendship of Mortals in the fall of 2000, I listened to J.S. Bach’s Goldberg Variations — the two well-known recordings by Glenn Gould (1955 and 1981) and one by Murray Perahia from 2000. I had also discovered a version of this work transcribed for string trio by Dmitri Sitkovetsky and performed by a group called Triskelion. This is the version that found its way into the book. Charles, Alma and Herbert hear it at a concert at Miskatonic University in the spring of 1911, at the very beginning of their complex three-cornered relationship. Charles also describes his impressions of a mass by Palestrina. (I have thought at times that music reached its peak in Renaissance polyphony and has been on a downhill course ever since).

As Herbert’s experiments begin to have dire consequences, and Charles begins to suspect what might be demanded of him in his role as Herbert’s friend and confidant, the gorgeous Miserere of Gregorio Allegri seemed like the perfect accompaniment for his dilemma, especially as I’m sure I read somewhere that the 51st Psalm is considered suitable for the funeral service of a suicide.

By the time I reached the climax and resolution of the story, I was listening repeatedly to Loreena McKennit’s CD The Mask and Mirror, especially her treatment of “The Dark Night of the Soul” by the mystic St. John of the Cross. It had a distinct effect on my outlook on Herbert and Charles and the denouement of their friendship.

Islands of the Gulf began life as one book in four parts, but ended up split into two volumes, now subtitled The Journey and The Treasure. Three musical works are associated with this book. In Volume 1, The Journey, while Francis Dexter and Margaret Bellgarde sail from Victoria to Bellefleur Island, Margaret mentions that Francis at one point sings “an old folk ballad about a false love and a deep-laden ship.” This, of course, is the song known as “The Water is Wide” or “O Waly, Waly.” The performance I was taken with at the time is by the wonderful Canadian countertenor Daniel Taylor.

Islands of the Gulf is set on the west coast of Canada, specifically the Gulf Islands and Victoria. There are frequent references to boats and sailing. Part of a tone poem entitled Through the Lions’ Gate, written by Michael Conway Baker to celebrate the city of Vancouver, was a perfect accompaniment for the sailing scenes, especially those where Francis and Julian take off on adventures in Julian’s sailboat, the Flying Star. (Never mind that this section is called “The Mountains”).

Islands of the Gulf was actually written for the climactic scene (of Volume 2, The Treasure) inspired by the 40-part motet Spem in Alium by Thomas Tallis. This complex and glorious work employs eight choirs of five voices, and may have been intended for performance in a circular space. Listening to this music, I perceive a circular movement, like a storm growing in power and effecting a transformation. The transformation, of course, is that of the amoral rationalist Herbert West into Francis Dexter, who carries a healing power over which he has no control. The text of Spem in Alium is from the Book of Judith and, like that of Allegri’s Miserere, expresses a desire for absolution for sin, but with hope of attaining it.

I wrote the final book of the series, Hunting the Phoenix, because I felt I owed something to Alma Halsey, who was Charles’s romantic interest in The Friendship of Mortals. I wanted her out of the way while I dealt with Charles and Herbert, so I packed her off to Europe during World War I and left her there. That seemed rather shabby in retrospect, so I decided to make her the narrator of the final book. Once the three characters are reunited in Providence, R.I., they experience a good deal of music. There is a concert that corresponds to the one in the first book. It takes place on Midsummer’s Eve (actually the summer solstice), featuring (of course) the overture to Mendelssohn’s A Midsummer Night’s Dream and Rachmaninoff’s Symphony Number 2, which to me sounds like an ocean voyage. Brahms’s violin concerto is also on the program and leads to a significant moment in the narrative. But the central music of this book is the Jazz Suite No. 2 by Shostakovich. I heard it on the radio driving home from work one day and instantly had a vision of the “waltz to the end of the world” scene in Chapter 29. The book had to include this scene. Now when I look at the lovely cover image designed for the book by Alisha at Damonza.com, I hear that music again. 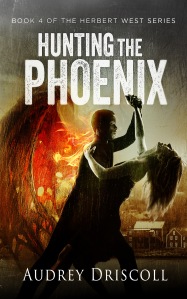