A number of plants have been given names indicating that a foul smell is part of their characteristics. The Gladwin iris, for example, has the Latin name Iris foetidissima. Others simply have a reputation for smelliness. Descriptions of Geranium macrorrhizum almost always include a reference to its foul odor. I find both of these designations exaggerated. Neither plant emits any kind of smell unless the leaves are crushed or at least disturbed, and the smells, though not exactly perfumes, aren’t that bad.

The strange thing is that some distinctly stinky plants seem to have eluded a bad reputation.

After the lilacs have faded and before the giant nameless climbing rose begins to bloom, my garden goes through a distinctly smelly period. The culprit is the Italian arum (Arum italicum). It’s a tough, useful plant, with showy marbled leaves that emerge in fall and last into spring, and weird little clusters of seeds in late summer — like tiny, bright orange-red corncobs on sticks. But in May it blooms, and the flowers, like so many of this family (think skunk cabbage), stink. The pollinators of these plants are flies, so it makes sense that they emit smells we consider objectionable. My Italian arum’s flowers smell a bit like creosote, but even more (I think) like rotten teeth breath — a pretty disgusting aroma to be wafting around the garden on a calm, warm, evening.

I acquired this plant because it was enthusiastically endorsed by the late Henry Mitchell, one of my favourite garden writers. He wrote at least two essays extolling its virtues. Beth Chatto, another esteemed gardener, recommends it in The Dry Garden, one of my gardening bibles. Neither of these authors says a word about the foul smell the arum emits during its bloom time. Descriptions of the plant at various websites fail to mention this quality as well — a disservice to those researching potential additions to their gardens.

Jurgen Dahl, a well-known German garden writer, has a chapter called “The Stinking Garden” in his book The Curious Gardener. He mentions three members of the arum family — dragon arum (Dranunculus vulgaris), voodoo lily (Sauromatum venosum) and the enormous and amazing tropical Amorphophallus titanum, which produces the world’s biggest and smelliest flower  (the flower is up to 2 meters tall). Of a plant that bloomed in 1996 in a botanical garden in Bonn, Dahl says, “It stank infernally for eight days.” (Henry Mitchell wrote about another specimen of this plant, and definitely mentioned the smell). But there is no mention of the Italian arum as a candidate for Dahl’s stinking garden. OK, I concede that its smell isn’t noticeable all the time, only on calm, warm evenings. But that’s true of a lot of fragrant plants too.

I began to think that my Italian arum was an anomaly, smellier than normal. After all, I did not buy the seeds from a reputable supplier, merely collected a few from plants near a walking/cycling trail I use frequently. I was pretty pleased with myself for identifying the plant while it was in leaf and watched for the seeds to ripen months later. Maybe this was a vulgar cousin of the Italian variety, I thought. But when I added “smelly” to my search, I got results. An article on the website of the Cooperative Extension Service of the University of Arkansas says that the flowers of the Italian arum smell like feces, and also mentions that the plant has been given the rather rude epithet “priest’s pintle,” because of the anatomical look of the flower. But the author of the article also calls it a “delightful little plant” (which it is when out of flower). So, confirmation at last, although I disagree with the description of the smell. But whether it’s reminiscent of rotten teeth or poop, it is undeniably foul. 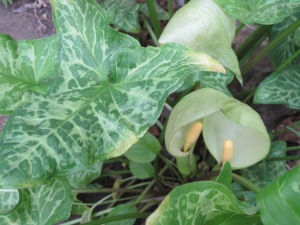