Here are precipitation (i.e. rain) amounts for my garden for the past several months:

The really atypical numbers there are the ones for May and June. Normal rainfall amounts for those months are closer to 20 mm, or almost an inch. Add to that the warm winter of 2014-2015, which resulted in low snowpacks in the mountains of British Columbia, and you have the Drought of 2015.

Not that it has affected this small garden very much. In fact, things here are more or less normal for late August — tired and messy in spots, not bad in others. With asters preparing to bloom, and the good old mulleins and delphiniums putting forth their second efforts, things generally look better than they have in other Augusts. 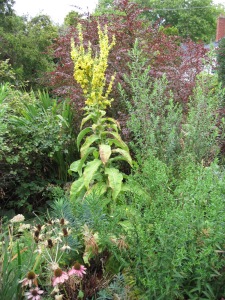 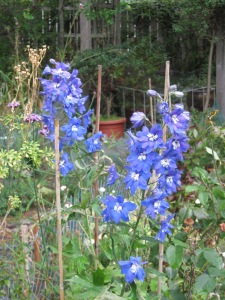 The reservoir from which the area gets its drinking water was enlarged some years ago, after much controversy. This has proved a real boon, because we have not gone beyond Stage 1 watering restrictions (which are pretty mild) since the summer of 2001. It’s like having a giant rain barrel in the Sooke Hills. Other areas, however, have not fared so well: the Sunshine Coast (well-named, except the sunshine comes in liquid form much of the year) was under Stage 4 watering restrictions for several weeks. That meant no outdoor water use at all. Only certified farmers could water anything. Some gardeners resorted to lugging bath and laundry water in buckets to keep plants alive.

The drought finally broke on August 28th. We have had more rain in the past four days than in the entire preceding four months. This may be an early start to the fall-winter rainy season, but a return to warm and sunny is likely in September.

The big questions are: how much snow in the mountains this winter? And what about El Nino? It has been predicted to be a “monster,” although this may be media dramatics. Then there’s the “Blob” — a huge area of warmer-than-normal water in the eastern Pacific. Lately it’s reported to have split into two smaller blobs, but no one knows what the combined effect of Blob + El Nino might be.

One thing does seem clear — the trend here is toward warmer, drier summers. It seems weird to have company in my perennial frets about drought. Usually when it comes to summers, it’s a chorus of “More, hotter, longer!” Maybe fears are developing that the California drought is creeping north. In any case, local and provincial governments are making noises about adapting and preparing. Cities are rethinking their choices for street trees and wondering about developing standards for grey water systems and cisterns in new houses. Gardeners may be thinking about cisterns and giant water tanks as well.

With plentiful water from the hose, this has been another good year for tomatoes after a whole string of bad years from 2010 through 2013. 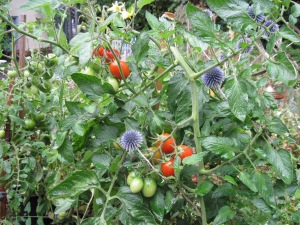 Hopefully, sad scenes such as this won’t become more common. 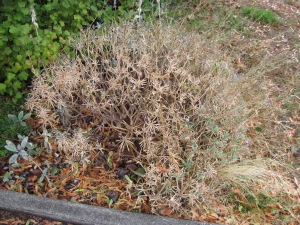 Ending on that hopeful note… 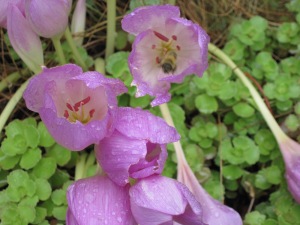