One year ago, we added a canine element to our household — a 2-month-old Newfoundland puppy named Nelly.

She has certainly made a difference both to house and garden.

Here is Nelly at 4 months checking out the area around the pond. 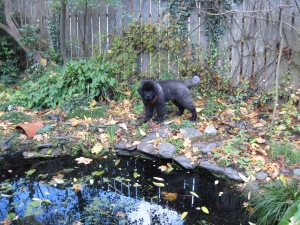 Nelly by the pond

It quickly became obvious that free access to all parts of the garden was not going to work. A 20-pound puppy bouncing around in the fall is one thing; a 50-pounder among the tender shoots of spring is another. Then there is the whole “potty patrol” issue.

A whole set of little fences was rapidly constructed. I can’t say they improve the appearance of the place, but considering the alternative, they are acceptable. 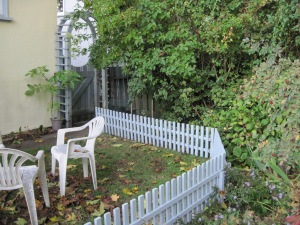 The wooden picket fences are easily removed to permit lawn mowing and access to the adjacent beds. The wire fence around the circular lawn is nearly invisible, but the posts holding it up are not. I plan to replace them with more uniform and less visible wooden or metal posts.

Just now I am re-edging that circular lawn so the edge is outside the fence. Maintaining the edge is an exercise in frustration with the wire and posts in the way. For me, clipping lawn edges has a meditative quality, and a nice edge is crucial to that well-kept look, so something had to be done.

Re-edging under way (and another plastic chair)

Then there is the dog pee issue. (Living with a dog certainly brings one close to the basic elements of life). Even though it rains quite a lot here in most winters, the three small sections of grass in the back garden soon started to acquire brown patches. Dog urine, it seems, has the same effect as a fertilizer burn. Now I’m not a big lawn aficionado, but if a lawn is present in a garden it should look better than leprous. Not being in a position to rip it out and replace it with brick paving, I am now engaged in lawn repair — seeding with a mixture of fescues, perennial rye grass and clover, which are said to be  urine “tolerant.” Thing is, since the existing lawn is already a pretty tough, mongrel mixture, including clover, but still died out in large patches, the repairs may not work.

The local sparrows, moreover, have discovered the smorgasbord of lawn seeds and descend in flocks every morning to hunt and peck. I have raked some fallen leaves over the seeded areas to cover the seeds. Once they have sprouted, I will remove the leaves. Then I’ll have to figure out how to protect the new grass and clover plants from The Dog.

Probably the worst episodes, the ones that brought the gardener in me to near-despair, were several instances of digging. Left to her own devices for a couple of hours, Nelly dug some fair-sized holes in the beleaguered lawns, ripping up tree roots to chew (commendable, if destructive) and, of course, earthworms. Sections of wire fencing and chicken wire, laid flat and weighted with rocks, prevented further digging. So (I hope) has the passage of time, but we’ll see what happens next winter and spring.

Garden, gardener and dog have survived the year. Newfoundlands are reputed to be among the most placid of dogs. Once they’re fully grown, they have a tendency to turn into canine couch potatoes and need encouragement to be active. Nelly’s favourite activity now is going for walks to the local off-leash park and nearby beach (from October to May only), where she can play with other dogs. But she likes to play at home too, with a bit of encouragement.

Playing in the garden

More playing in the garden

Happily, the small fences, which are only 18 inches to 2 feet tall, continue to be effective in protecting the beds from unwelcome visits. Nelly could easily jump over them, given sufficient incentive, but so far hasn’t been motivated. We did have to make sure there were no fallen apples to provide that incentive.

Fortunately, the senior animal in the household has adapted to Nelly’s presence. I can’t say they’re friends as yet, but Zeke the 18-year-old cat and Nelly the Newf are getting along.