One good thing about being retired is being able to go on weekend outings without feeling guilty about neglected “shoulds” that have to be packed into the two days per week away from work. Now that stuff can be kicked down the road.

So today I hit the road and drove up to the Cowichan Garry Oak Preserve, a site managed by the Nature Conservancy of Canada. It’s closed to the public except for this one day, so this was a valuable opportunity to see and learn about an ecosystem that once existed in the place where I live and garden.

The weather was perfect — sunny but not too hot. The 84 acre site, a former farm, consists of an open slope with a few giant oaks that are several hundred years old, and a more heavily treed area of both large and small oaks. At the bottom of the hill is a wetland area. Due to the rather warm spring, many of the early wildflowers had finished blooming, but the camas were still putting on a show, along with some spring gold and patches of seablush here and there. 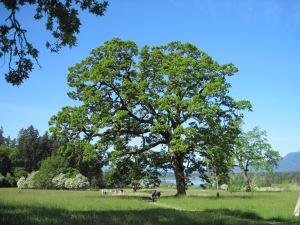 Bluebirds have returned to this site and were a big hit. Serious looking cameras and spotting scopes abounded among participants. I had never seen a bluebird and was astonished at the truly electric blue plumage of the male birds. (The females are a nice rusty brown). I wandered along a network of narrow, mowed paths, snapping pictures and soaking in the ambience. This is a very special place; there are spots from which no buildings or roads can be seen, even though it is located in farmland and is quite close to the spreading suburbs of the small city of Duncan. 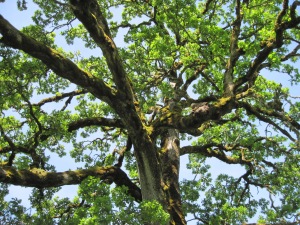 This tree was full of noisy swallows

I attended two lectures, presented under an enormous oak, with tree swallows swooping and chortling overhead. Their vocalizations almost drowned out the first speaker at times — forest ecologist John Dick explaining the role of fire in maintaining these landscapes. Parts of the preserve are burned at regular intervals to clear out invasive species and control the growth of shrubs which would eventually turn the meadows into forest. Garry oak meadows were burned in this way by the native peoples who lived here before colonization, as a way of maintaining the productivity of the camas plants that were an important food resource.

Pools of camas under oaks

The second lecture was by writer and gardener Maleea Acker. She described how she has turned her small city lot into a native plant garden, by rooting cuttings of shrubs and using sheet composting to suppress grass and create rich soil for wildflowers. Reasons for other gardeners to introduce native plants to their gardens or even to convert all the space at their disposal to something like its former self: climate change, which will make sustainable, drought- and heat-tolerant landscapes desirable; more importantly, the hope that patches of native plants in private and public gardens will create connections, weaving a network over the landscape. 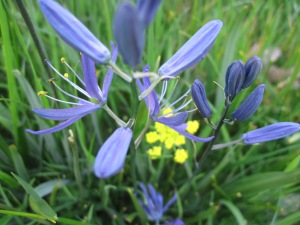 Another type of connection is that between gardeners and the land they work with, and among gardeners themselves. The latter was certainly evident at the Cowichan Garry Oak Preserve.