Near my garden shed I have a motley collection of pots containing unintended plants. They might be called rescues. One way or another, they were displaced from their original growing spots and ended up in pots. Some will be planted in new, hopefully appropriate, spots. Others are just marking time, subsisting in their pots until I plant them somewhere or, sadly, decide to dispatch them. (In the garden, one can’t have a 100% “no kill” policy). 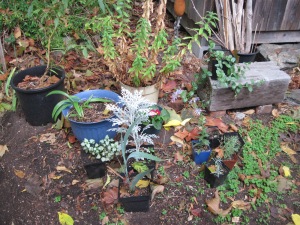 Rescue plants arrive in a variety of ways.

Accidental cuttings. Convolvulus sabatius came from a bit broken off the main plant while poking around. It had flower buds so I put it in a vase for a couple of weeks. Meanwhile, it grew roots, so I potted it up. It’s always good to have a spare of this plant, because I nearly lost it a couple of times. The rose “Fragrant Cloud” came as a cut flower someone gave me years ago. I must have been so impressed with the scent and colour that I intentionally rooted it. Then there’s a possibly pink (it’s never bloomed) iris. A chunk of the rhizome was snapped off when a hose snagged it. Once potted, it grew a fan of leaves. I intend to plant it (in a better spot, of course) and see if it is indeed pink. The “Dusty Miller” type plant (don’t ask me for the botanical name) visible in the above picture must be another accident. The main plant is in a big pot near my front door; I have no idea why I rooted another one.

Volunteer seedlings. I grow my tomato plants in pots these days. It’s amazing what else sprouts in those pots, from seeds that come from who knows where. Well, in the case of the peach tree, it was a pit that ended up in the compost and so in the soil for the tomato plant. When the Cornus sericea (red osier dogwood) popped up, I thought it was a Pacific dogwood (Cornus nuttallii), an attractive native tree that has been struggling with disease of late. Then there was the walnut that sprouted at the edge of one of the perennial beds. I know of no walnut trees in the neigbourhood, so a bird or other creature must have brought it some distance before dropping it. I dutifully potted up all of these tree seedlings, thinking they deserved a shot at life. Trouble is, I have no room for more trees on this overgrown patch of ground, and the volunteers, now saplings, struggle along in pots, except for the Cornus sericea, which has grown roots through its pot’s drain holes and is now solidly rooted right next to the house foundation. This shrub tends to sucker. Not good.

Experiments. I have a habit of picking up seeds of roadside or trail-side plants that look interesting. A few years ago I saw what proved to be great willow herb, Epilobium hirsutum, in bloom by the bike trail I used regularly. I had never seen this plant before, so made a point of collecting a few of the fluffy seed clusters. Seedlings resulted. By that time I had identified the plant and was aware of its designation as an “alien invasive” and a noxious weed in Washington State. So I’ve kept it a prisoner in a pot and really don’t know what to do with it, because it’s obviously not happy and is no ornament. Lilium columbianum, on the other hand, is a desirable native lily, with elegant small yellow flowers. I managed to sprout three seeds a couple of years ago. The seedlings actually resprouted this spring — one minute leaf apiece. Then they were discovered by tiny slugs. Valiant rescue efforts ensued. The tiny sprouts died down about midsummer. I’m hoping this was normal — summer dormancy, you know. I’m hoping it isn’t permanent.

Gifts. Over the years I’ve been given some brightly-coloured mixed lily bulbs — brassy yellow, screaming orange, deep red. I couldn’t see them blending into my perennial beds, somehow, so popped them into a couple of pots where they bloomed happily for several seasons. Then they started to dwindle. So this year, I turned all the little bulblets out of the original pots and transferred them to different pots with fresh soil, all the while wondering if I was wasting my time.

Intensive care.  Another lily, another story. After my potted “Stargazer” lilies bit the dust a few years ago, I bought something called simply “Oriental Lily” that vaguely resembled them, but wasn’t as good. In the way of lilies, it bloomed well for a while, then went downhill. So last week I did pretty much the same thing as with the gift lilies described above. The difference is that in this case, I hope for success. Another salvage project was the hostas in a bed recently invaded by rapacious Norway maple roots, whereupon the hostas went from flourishing to feeble. I rescued a few divisions before they faded out altogether, with the intention of re-establishing them someday. In the meantime, they are quite happy in their pots near the pond.

Spares. Some plants are so useful it’s always good to have a few extras on hand. Lamium maculatum “Pink Pewter” is one of these. When I refurbished the Meconopsis bed a few weeks ago, where “Pink Pewter” was prospering, I saved some for future considerations.

Trellis and witch hazel in fog. 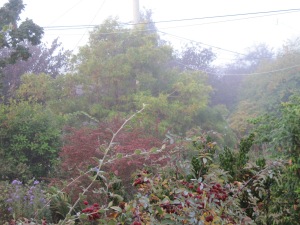 Ailanthus leaves and rain drops in the pond.