Most of the random garden photos I’ve taken lately feature the incredible colours of and patterns on the about-to-depart leaves of the smoke bush, Cotinus coggygria.

Smoke bush is a variable and versatile shrub. There is a form whose summer foliage is green, but most of the ones I see hereabouts are one of the purple-leaved forms. Mine is called “Royal Purple,” but there is a plant I’m acquainted with that’s an interesting red-green with purple undertones, and whose fall colour borders on lurid.

I took this picture with my phone; the colours came out a bit weird.

Smoke bushes may be handled in different ways in the garden. Left to themselves, they can become small trees — “small” meaning up to 20 feet tall, but they tend to be almost as wide, so you need a lot of room for an unrestrained plant. They take pruning well — anything from trimming last season’s growth by one-third in spring to cutting the whole bush down to stubs. Unpruned, they bloom in summer, putting out clusters of tiny flowers surrounded by pink fluff (the “smoke”). Pruned plants, obviously, don’t bloom, but some gardeners prefer the foliage to the flowers. Severe pruning — which is what I did to my plant last spring — results in really vigorous, whippy shoots. I found it necessary to do some mid-season trimming to keep the plant within bounds. I think I’ll stick to a more moderate treatment for the next few years.

This plant was cut down to 2 feet in spring, and trimmed in summer, and still topped out at more than 6 feet, and 4 feet wide.

For me, the whole point of growing a smoke bush comes in the autumn, when it starts to change colour — everything from yellow through shades of orange, into reds and purples, and even some green emerging. Many leaves develop little brownish-grey marks on either side of the centre rib that turn them into little works of art. 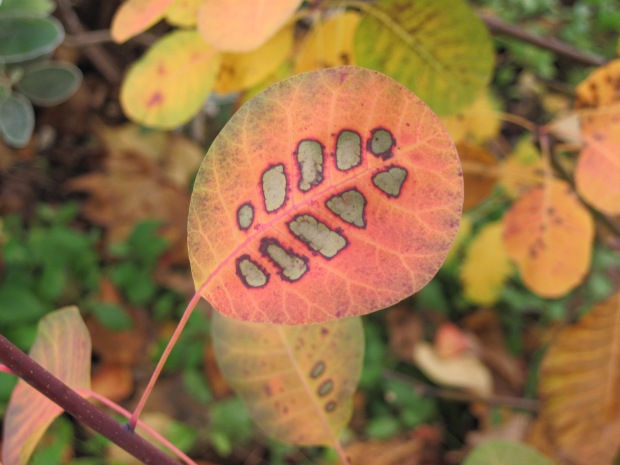 Looks as though carefully painted. 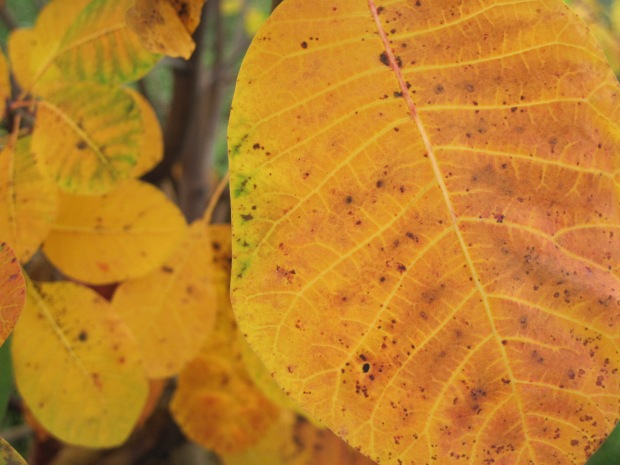 More good features — smoke bush is drought tolerant and does well in light shade, although full sun brings out the fall colours best. It seems to be pest-free, although I think I read that verticillium wilt is a potential problem.

Smoke bush is a trouble-free, versatile shrub with much to recommend it. It looks good with other plants too. 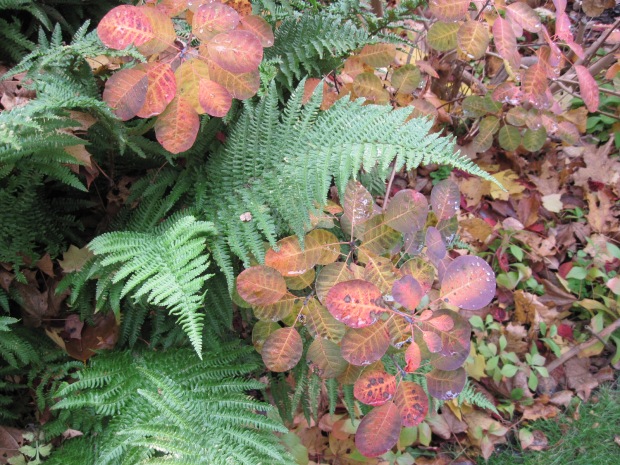