I have at least three sizable English hollies (Ilex aquifolium) on my modest patch of land. Maybe more than three; they may be multi-trunked or actually two or three plants growing close together. A next door neighbour who moved away some years ago told me his place was surrounded by a holly hedge at one time. Knowing how birds spread the seeds around, I’m betting my plants are descended from that hedge.

Many people really like holly. Gardeners in cold-winter areas bemoan not being able to grow it and wish they could. Having lived and worked with these plants, I’m not so sure.

“Worked with” means pruned them, handled the prunings, raked up their dead leaves or encountered them while weeding or planting.

Hollies can become small trees — if by “small” you mean 25 feet tall and 10 to 12 feet wide. They have a habit of branching low on their trunks, and unless one makes a point of crawling under and removing the lowest branches, they get up to all kinds of mischief. I have found thin, whippy branches 6 to 8 feet long hanging down and rooting where they touch the soil. Left to themselves, they would become new holly bushes, thickening the thicket, so to speak.

Hollies are, of course, broadleaf evergreens, so a large plant casts considerable year-round shade. Other plants growing near the hollies are susceptible to being shaded out of existence or engulfed by ever-expanding holly foliage. Unless the gardener has space for such expansion, and wants a tall, impenetrable hedge, it’s necessary to prune and trim every couple of years to keep the plants within bounds. The good news is that hollies can endure severe pruning, so a gardener doesn’t have to fret about doing it wrong. Lop away!

And now the bad news — holly leaves are intensely prickly. Each leaf has several spines along its margin. Even fallen leaves are a menace to the leaf-raking gardener wearing thin gloves or no gloves at all. Burrowing into a holly thicket or crawling under low branches to cut out any with rooting ambitions is an exercise in masochism, as is gathering up and lugging the cut branches. I have little pink prickle marks all over my hands and wrists — and I was wearing gloves! 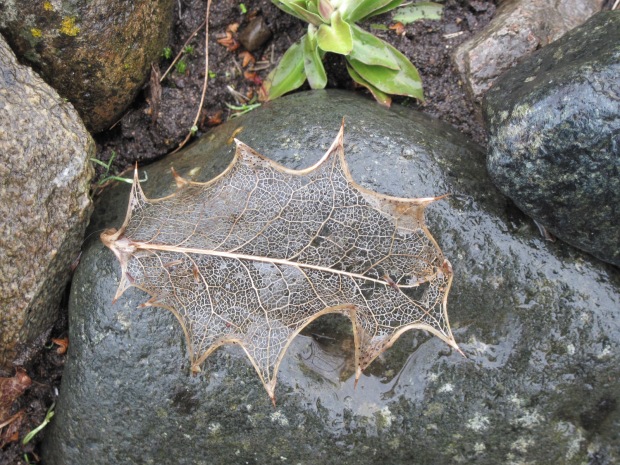 Despite all this, hollies are undeniably attractive, in a dark, prickly way. The red berries borne on the female plants add a festive zing (and, of course, birds love ’em and distribute the seeds far and wide). A gardener without a holly bush who wants one should probably acquire a named variety rather than go with the species, which tends to be overly vigorous. Many cultivars are available, offering a range of sizes, colours (including variegated) and degrees of hardiness.

A large holly can support climbers such as clematis, whose blooms — especially the lighter colours — look good against the dark foliage. One of my hollies hosts a Clematis armandii, which looks wonderful when in full bloom. Of course this complicates the pruning business considerably, so a clematis that can be cut down every spring, such  as one of the Viticella types, would be a better choice.