After various distractions, I’ve finally resumed an exercise program I started early in the year. It’s a strength-building regimen by physical therapist Ming Chew, author of The Permanent Pain Cure.  There are two sets of three different exercises, some involving weights. Between sets of “reps,” one is required to rest for ninety or forty-five seconds. It’s amazing how long these rest periods feel if I just sit there, so I grabbed a book to read from the huge and random accumulation of old paperbacks that lives in our basement.

The Golden Apples of the Sun is a collection of stories by Ray Bradbury originally published in the 1940s and ’50s. The scribbled “50” (meaning 50 cents) on the cover indicates my copy was a used bookstore find — probably 30 years ago.  Between exercises, I sit down and read a page or so, and I must admit sometimes the rests are extended a bit if the narrative is too captivating to interrupt.

I was surprised how applicable some of these stories are to present-day concerns. “The Murderer” is about one man’s way of dealing with intrusive communication technology. “The Big Black and White Game” is a charming yet disturbing look at race relations in America through the eyes of a child at a baseball game. “I See You Never” is about a Mexican man in Los Angeles facing deportation. And “Embroidery” tells how three women spend the last hours before a nuclear explosion. Bradbury’s writing is fresh and delightful. I recommend tracking down this book, The Golden Apples of the Sun, or at least the stories I’ve mentioned.

A while ago, I bought The Cthulhu Mythos Ebook Bundle from Dark Regions Press. (I think it’s still on sale for $15 US — a deal at that price). Two of the books in this tentacled treasure chest are compilations of weird fiction that impressed and influenced H.P. Lovecraft, the master of the weird tale. They are edited and introduced by Lovecraft scholar and aficionado S.T. Joshi. The authors include M.R. James, Ambrose Bierce, Robert W. Chambers and Algernon Blackwood, plus a few until now unknown to me, such as Fitz-James O’Brien, Ralph Adams Cram, and A. Merritt. Merritt’s story, “The Moon Pool,” contains a reference to an ancient being called Chau-te-leur. Sounds a bit like “Cthulhu,” doesn’t it? Another story, “Ooze,” by Anthony M. Rud, contains a creature that may well be the ur-Shoggoth. And the main character of Blackwood’s “Ancient Sorceries” reminded me of HPL himself. 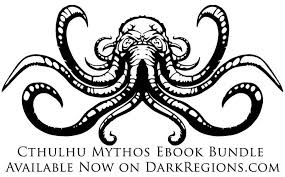 All these stories have been around for a while, and many of them show their age, a few in rather unflattering ways, but Lovecraft fans will appreciate most of them, as well as the other offerings in the ebook bundle. I know I’m looking forward to working my way through them.