Now that the seven remaining blue poppy plants have been rescued from maple and magnolia roots and given deluxe accommodations in a couple of half-barrels, I thought they should also have protection from excessive winter rain.

In their native environments (Tibet and the Himalayas), rainfall distribution is exactly the reverse of Victoria’s — wet during the monsoon season (May through October) and pretty much dry from November through March. Here, the dormant poppy plants are bathed in rains during the winter months, which often results in crown rot and death, even in my sandy soil.

The solution? Poppy “pagodas” — charming little roofs on stilts that fit over the half-barrels. 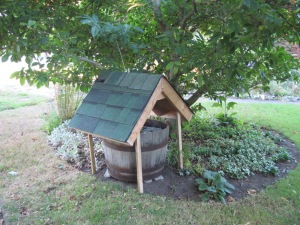 They’ll remain in place until next spring, making sure the soil around the precious poppy roots is damp, rather than sopping. If it seems to be drying out, I’ll dribble in a bit of water.

After all this fussing to accommodate them, I have great expectations of these plants. We all know where that can go, however, so I’ve reserved a bit of cynicism, just in case.

Otherwise, the garden is going through its usual autumn process. I wouldn’t call it “decline,” because I love fall, and because from certain angles, the garden looks better than it did a few weeks ago.

Aster “Pink Cloud” living up to its name. 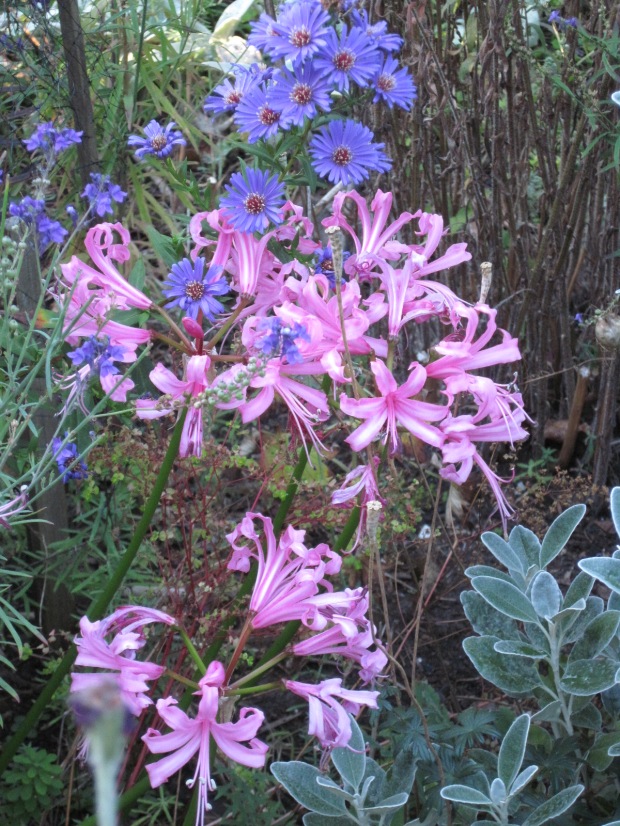 I’ve hung the hummingbird feeder out again. Back in May it became obvious that the hummingbirds were more interested in flower nectar than the sugar water in the feeder (and why not?), so I removed it for the summer. Now they are visiting again, and this morning a crowd of bushtits showed up. They don’t have the right sort of beaks to use the feeder, but seem to get something from it, so good for them. Dark-eyed juncos are back in town after spending the summer elsewhere, and I’ve heard robins calling in the evenings, a particularly plaintive song that seems right for this time of year.

It’s the first full moon of autumn tonight — not to be missed!