I’M reposting my very first blog post from May 2010, originally titled “Herbert West, Reanimated.” Because I started blogging as part of my self-publishing project, it made sense to begin by introducing my book, which at the time was on the brink of being published.

Shown below is the original cover image, created by moi, with my husband and a neighbour as models. Four years later, I replaced it with the professionally designed version in the featured image.

The Friendship of Mortals has received some good reviews (and a few others as well) in the past decade, and the ebook just happens to be available for free (at the Smashwords store only) during their Authors Give Back sale until May 31st, 2020.

In one of my books of H.P. Lovecraft’s stories, (The Tomb and Other Tales, Ballantine edition, 1970) there is a chronological list of HPL’s works, with check marks by the ones I had read.  Notably unmarked is “Herbert West, Reanimator,”  written in 1921-1922.  It was published in a magazine called Home Brew as a series of six horror stories.  In his biography of HPL, L. Sprague De Camp refers to them as “perhaps the most forgettable ” of all Lovecraft’s stories.  Despite this dismissal, I was delighted finally to run across them in 1998.

While it’s true that Herbert West exemplifies some of HPL’s faults as a writer, notably overuse of adjectives such as “hideous” and a coarseness of plotting, I found the story intriguing.  It struck me as an outline for something bigger.  The two main characters, Herbert West and the nameless narrator, begged (in my mind at least) to be fleshed out.

This is the question about any “mad scientist.”  Is he evil or merely mad?  Is his friend stupid and credulous or simply loyal?

In the fall of 2000, two years after I read Lovecraft’s story, I began to answer these questions about Herbert West. I ended up several years later with a hefty trilogy. of which I am about to publish the first book, The Friendship of Mortals, as an ebook.  By the time I post here again, it should be available on Smashwords.com, technology permitting. 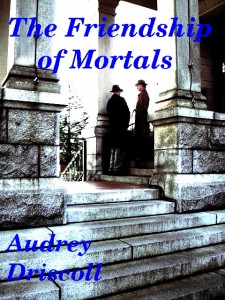