The year began with a seriously cold period in early February that caused great anxiety in the gardener, who hadn’t provided wraps and covers for the most tender plants. Fretting lasted well into spring. Did the last Gaura lindheimeri perish? Yes. What about Convolvulus sabatius, the charming blue relative of the hated bindweed? For a long time it seemed so, but on the first of June a sprout emerged. 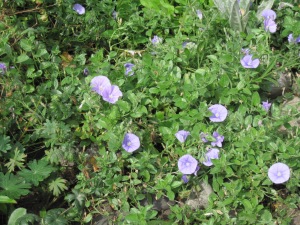 After putting on a pleasing show in 2013 the blue poppies failed to bloom. Lots of leaves, no flower stalks. Was it because of the cold in February, which delayed sprouting out? Or the gardener’s failure to supply extra nutrients, especially considering that the plants grow on top of the roots of a large magnolia. These poppies refuse to compete with roots. They would rather die, and there’s every chance they will not appear next spring.

Then came a warm, dry summer. Not hot, but definitely warm. It was a great summer for tomatoes. By September the ten plants in large pots were producing well — nice ripe tomatoes.

Roses did well too — the anonymous pinky-white climber slung over one of the Norway maples, and even Fragrant Cloud, which got deer-chomped in 2013.

Deer were not much of a factor this year, after being a huge one in 2012 and 2013. The flimsy deer fence put up at their preferred entry point did the trick, but more fundamentally this area seems no longer to be on their route. Even so, a couple of hostas, formerly large and prosperous, were not helped by being chomped just as they were dealing with what must be a fresh invasion of maple roots into their bed.

Asters did especially well, especially the two large clumps of a purple variety (name unknown) in the front garden.

One of the better scenes in the front garden this year

In late September was the Coming of the Dog — Nelly the Newfoundland puppy.

The back garden is now a maze of small fences intended to prevent casual incursions. They seem to be working, but give the place an odd look. It remains to be seen how garden work will go in the vicinity of these barriers.

But the Chinese witch hazel (Hamamelis mollis) has set more buds than it has ever managed to before. Some of them are preparing to open, unfurling threads of yellow.