After 148 mm. (nearly 5 in.) of rain in September, 93 (3 in.) of which occurred in the final week of that month, October was curiously dry and foggy. From the 11th to the 27th, there was widespread fog nearly every day, sometimes thick and persistent, to the point that flights were cancelled, both short hops from Victoria Harbour and regular flights from Victoria International Airport.

I love fog, but didn’t enjoy it as much as usual because I was scheduled to fly to Toronto on October 23. Early that morning, things looked very thick here at home, but the fog thinned out around the airport and I departed without delay. By the time I returned on the 29th, it was gone. I came back to a garden full of fallen leaves and late blooms finishing up — blowzy is the word. I still haven’t reconnected with the garden, regarding the mess with detached unconcern from the window. That will change once the rain stops and I get out there.

The garden I left 11 days ago was quite a different place. Most of the leaves were still on the trees. 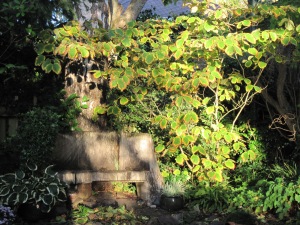 Asters were in glorious bloom. 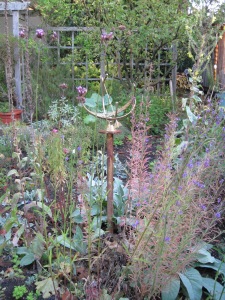 There were interesting fungi, including a giant black mushroom. 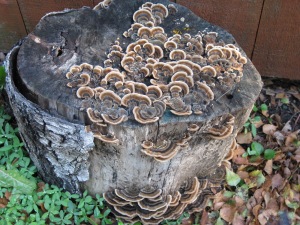 The garden shed was re-shingled with artisanal hand-cut cedar shakes.

And the autumn crocuses were at their best. 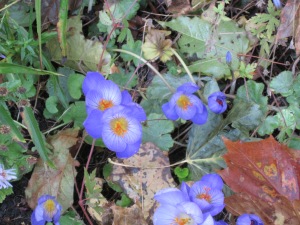 But now we’re in November, a less frivolous month. Grab that rake, tote those leaves. Pens to paper, fingers to keys, noses to the proverbial grindstone!