To my surprise, I forgot to schedule the post I had intended for today (March 22nd). I’ll schedule it for next week, and in the meantime, here are some photos from my garden taken on the first day of spring.

I was about to say something about the garden being a welcome diversion in these days of staying at home and “social distancing,” but that would be inaccurate. The truth is I prefer messing about in the garden to most kinds of socializing.

Fellow bloggers, how are you coping with whatever virus-avoiding situation you’re in? Are you reading, watching, or maybe even writing? Is anyone getting bored?

Now that spring is imminent, perennials are poking their noses above the ground, telling gardeners that they are alive and ready for another growing season. Gardeners hover anxiously over spots where particularly fussy or cold-intolerant specimens were last seen, hoping for a sign of life.

I’ve been hovering over my blue poppies. Late last summer, I transplanted them to what I thought were deluxe accommodations in half-barrels. Excellent soil, no tree roots, and a pea gravel mulch intended to prevent crown rot. Custom made roofs on legs to keep away winter rain. No efforts were spared. The plants settled in nicely and made new growth before they went dormant for winter. So far this spring, things don’t look good. I’m beginning to think the pea gravel was a mistake; it probably kept the top layer of soil moist enough for the dreaded crown rot to do its thing. If all seven plants are dead, I’ll have to acquire new ones and try again.

The white and yellow daffodil in the featured image has bloomed faithfully each spring since the mid 1990s. At first there was only one flower; a few years later, there were two, and the past two or three springs, it’s produced three flowers. So what? Daffodils are planted out by the thousands in parks and even in some private gardens. But this one plant is easily identifiable, and so regular, that I have come to recognize it as an individual.

This picture — of a gardener fussing over a few plants, or even a single one — is completely removed from the way plants are sold and handled on a commercial scale. We’ve all seen hundreds of potted plants for sale, not at nurseries or even garden centres, but at grocery stores, hardware stores, and discount consumer outlets. No one fusses over these units produced by mass propagation. They’re given minimal attention by busy staff, wheeled in and out of display areas daily, get knocked over by windstorms, and finally start to look a bit stressed. Plants that don’t sell by the end of July are put on deep discount and finally trashed. At least they’re compostable.

Then there are instant gardens installed by landscape contractors driving trucks with graphically designed logos on the doors. In a week, the job is done. A multitude of perennials and shrubs has been plugged into the ground in pleasing patterns. The operation has more in common with laying carpets or interlocking bricks than with my kind of gardening. Freshly finished, such gardens look lovely and (on a bad day) make me think mine — the result of a quarter century of earnest digging, planting, watering, and anxious hovering — looks pathetic by comparison. Of course, if not maintained by someone who knows what they’re doing, those installed gardens go downhill pretty fast. I’ve seen it happen.

Those who do large scale garden work seem to have a utilitarian or even disrespectful attitude toward plants. Often, it starts with razing and removal of every growing thing on a city lot — and of the original house too — followed by digging a great big hole, maybe a bit of blasting. A huge house is erected and landscaping installed by a contractor. Another contractor provides an irrigation system, probably programmed and controlled with a smartphone app. A truck pulls up once a week, disgorging fast-moving people wielding power tools who buzz through the place, mowing, trimming, fluffing up the soil and adding mulch. As long as the bills are paid, the place looks fine. In such gardens, you don’t see any shabbily-dressed figures (i.e., resident gardeners) drifting around, peering at plants and scuffling inefficiently, making repeated trips to the shed for yet another tool, a couple more stakes, or a ball of twine.

I want to say that the instant garden isn’t really  a garden, and those yard maintenance folks aren’t gardeners. I suspect this idea may be tainted with irrational sentimentality, but I’m clinging to it anyway. To me a garden is a patch of earth sweated over by someone who knows almost every plant that grows from it, who rejoices when those first shoots appear in spring and mourns when they don’t.

I suppose what I’m really talking about is analogous to the difference between the backyard chicken flock where every hen has a name, and the industrial poultry system. The small, personal garden and the installed landscape are really two different (if related) things. Each has a place, but in me they evoke opposite reactions.

Earlier this week I was planning to write a post about the arrival of spring. I mowed the lawn last weekend for the first time this year. There were crocuses, hellebores and even a precocious daffodil in bloom. Even though it was a month until calendar spring, it seemed to be under way here on southern Vancouver Island. 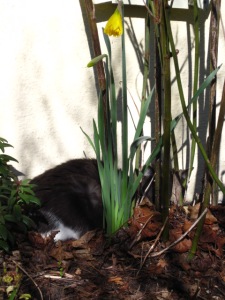 Then, four days later, this happened: 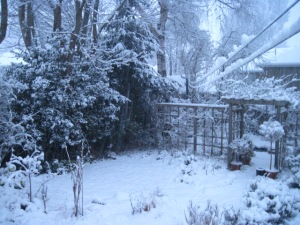 Between 20 and 30 cm. (almost a foot) of snow fell on Wednesday, February 23. Last night the temperature fell to -7 degrees C (19 degrees F), with a significant wind chill factor.

I admit it — we’re spoiled here. We think of “wind chill” as something that happens somewhere else. Many of us resent snow, especially in spring, already. The annual Flower Count is scheduled for next week! Snow isn’t supposed to happen.

But it did. And it’s hanging around, despite some melting during the sunny afternoon we had today, when the temperature actually approached 0 degrees C (32 degrees F). Tonight it’s predicted to go back down to -6. We won’t be back to normal (rain) until Sunday, and even then snow flurries are still in the forecast.

That daffodil? Like many in our slice of paradise, it’s not very happy right now. 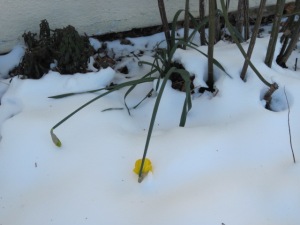 Then there are the hellebores — a sad sight.

Fortunately, they are hardy creatures that recover once things warm up, but in the meantime, I avert my eyes.