Hunting the Phoenix is available for free via a special promotion until end of day Sunday,  June 17th.

This is the final book of the Herbert West Series.

Journalist Alma Halsey chases the story of a lifetime to Providence, Rhode Island and finds more than she expected – an old lover, Charles Milburn, and an old adversary, renegade physician Herbert West, living under the name Francis Dexter. Fire throws her into proximity with them both, rekindling romance and completing a great transformation.

Middle-aged and cynical, journalist Alma Halsey looks back on the missed chances in her life with bitterness and regret. Revisiting her home town of Arkham, she comes into possession of a letter that changes everything. So what if it’s not addressed to her, but to her old flame, librarian Charles Milburn? Suddenly she’s chasing down a big story, and maybe she’ll reconnect with Charles as well.

Giving up her New York City life, Alma moves to Providence to track down another man from her past – one she’s assumed to be dead for more than 15 years – renegade physician Herbert West. It seems he’s living in Providence under the name Francis Dexter, and is once more engaged in nefarious doings. Once she’s gathered enough information, Alma plans to write an expose.

Things get complicated when Alma discovers that Charles Milburn is also in Providence, working for “Dr. Dexter,” and English neurosurgeon Edward Clapham-Lee is also looking for Herbert West. Everything goes wrong when the house she is living in catches fire. Seriously injured and far from home, Alma is forced to accept the hospitality of the man she has made her quarry. In Dexter’s house she finds healing, strangeness and unexpected friendships, and realizes her real quarry is herself.

The three celebrate their renewed friendship with a summer vacation on Cape Cod, until the appearance of Edward Clapham-Lee – a man as amoral and dangerous as Dexter’s former self – demands a return to Arkham for a final reckoning.

Islands of the Gulf Volume 2, THE TREASURE is available for free via a special promotion until end of day Sunday, May 27th.

This is the only book of the series narrated by Herbert West himself. 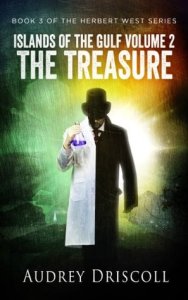 To survive his mother’s disappearance, the capricious attentions of his father and the brutalities of his brothers, young Herbert makes himself into a juvenile strategist and warrior of vengeance.

Turning to science as a solace for emotional turmoil, Herbert studies medicine at Miskatonic University in Arkham. As both student and physician, he pursues forbidden experiments with single-minded determination, seeking to discover the secrets of life and death. The Great War presents West with a great opportunity, but in that maelstrom of violence he crosses the frontier of rationalism into the territory of the bizarre.

Fleeing the consequences of his misdeeds, West changes his name to Francis Dexter and becomes a country doctor on Bellefleur Island. His tumultuous relationship with the artist Julian Vernon brings both joy and despair. For the first time since his troubled childhood, he allows himself to become emotionally attached to another human being, but the idyll is eroded by depression, drugs and jealousy, and Dexter’s choices result in tragedy.

Saved and supported by Margaret Bellgarde, Dexter allows himself to be drawn into her family to recover from illness and sorrow. Until a day in July when his past confronts him and forces him to face the truth about his role as physician and healer.

Islands of the Gulf Volume 1, THE JOURNEY is available for free via a special promotion until end of day Sunday, April 29th.

Here’s an opportunity for those who’ve read Book 1 of the series, The Friendship of Mortals, to find out what happens to Herbert West after his departure from Arkham.

Once, he was Herbert West, superlative surgeon and revivifier of the dead. Now he’s lost his reputation, his country and his name. Rebuilding his life as a country doctor on Bellefleur Island, he struggles with doubts, emotional entanglements and terrible memories of the Great War. Above all, he must forge a new relationship with his old adversary – death – and negotiate with a new one – love.

I’m curious to see which of the existing reviews readers will agree with.