I’ve had this post in my drafts file since fall (aka “autumn”) but just had to write posts about other things first. Books, more books, and book cover images. After all that stuff, it’s about time for a garden-related post. So here it is.

I like the look of a tidy, tended garden. Leaves raked, edges crisp, dead stems and stalks cut down to bristly little stubs. It has that “been there, done that” look at the end of a growing season. Now it’s resting, waiting for spring, when sprouts will sprout, buds will bloom, and the gardener will bustle about dispensing magic dust and fresh compost.

Does anyone detect a wee bit of absurdity in that last paragraph? Raking up leaves, carting them several yards/metres and several months later — when they’ve decomposed — lugging them back to the very same spot.

Maybe it’s better to let them rot in place. That’s good enough for Mother Nature, after all. You don’t see her busting her butt with wheelbarrows. (But then, she has all the winds of heaven at her service.)

This past autumn, I thought I would try something different. I raked leaves off paths and pavements, but let most of them lie where they landed on beds and lawn areas. I didn’t leave as many on grass as in the perennial beds, and I made sure there were no thick, smothering leaf mats anywhere.

The idea is that earthworms will drag those leaves underground and… do whatever they do with them. Eat them, I guess, and poop out the remains in the form of worm castings, churning up the dirt in the process.

I’ve also resisted the urge to cut down all the withered perennial stalks, even after they’ve lost their charm and just look dead. I’ve read that they provide cover and feeding opportunities for birds. Supposedly, bugs deposit eggs in the dead plant material, and whatever hatches out is appreciated by foraging birds. I certainly see them hopping around and scratching among the dead leaves, so maybe there’s something to that. (Of course, the big attractions at my place are feeders full of seeds and suet.)

I’ll let this scene persist until we’re back to double-digit temperatures (in degrees C, of course), whereupon I will cut down the dead so the living may flourish.

Another plus to this approach is that it’s less work. I just hope I’m not creating a perfect environment for plant-eating larvae and fungi that will cause damage next spring and summer. I don’t think those organisms understand the concept of karma.

I spent a few afternoons over the holidays doing cleanup in the garden that somehow never got done in the fall — cutting down old perennial stalks, raking up leaves that inevitably show up from somewhere after I think I’m finished with them, and massaging the compost heap to accommodate the new contributions. Now the place no longer looks abandoned, and I feel I’ve reconnected with the garden. 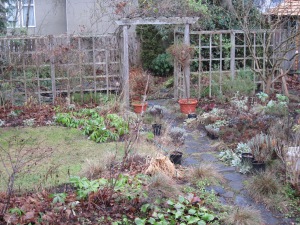 When I gardened in Saskatchewan, snow covered everything from November until March. The garden was an expanse of white; at dusk the snow would take on a mysterious blue colour that was quite gorgeous. Gardening became theoretical during those months, but when summer came (spring lasts about a week on the prairies), I had to go through the reconnecting process really fast.

It’s hard to take good garden pictures in December. Darkness comes early and stays late. There isn’t much to do in the garden so I’m not there to observe details. With the holidays, attention is often somewhere else. And snow is rare here on the west coast; most of our Christmases are green.

If I were a better photographer, I would have gotten a picture of robins feasting on cotoneaster berries on December 22nd. The bush went from looking like this

to bare in a couple of hours.

Instead, I’ll close with these snowdrops, which have been in this garden for more than 20 years. I don’t know what variety they are, but they bloom very early and are entirely reliable. The 2014 gardening season begins. 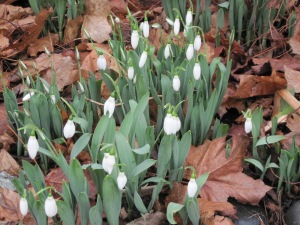