July isn’t a month for starting new garden projects. It’s not a good time to move plants around, too early to plant bulbs, too late to start vegetable or annual seeds (except for winter vegetables, maybe) and too hot for serious digging, sod-stripping and other labours.

Maintenance is the thing now: keeping an eye on everything, making sure water is supplied as needed, lawn mowing, edge clipping, and deadheading. While engaged in all that, the gardener inevitably notices Things That Must Be Done. Just not now. All these tasks and projects are written down in the Garden Notebook.

For example:  Blue irises have crowded out the blue Veronica in the Old Front Bed; and Geranium “Johnson’s Blue” and Limonium latifolium are in too much shade. Must remove some of the irises OR move the Veronica, Limonium and Geranium to sunnier spots. I hesitate to rip out the irises, because they bloomed so well this past spring.

An old lavender in the New Front Bed is on its last legs and scheduled for removal. That will free up a spot suitable for “Johnson’s Blue” as well as some of the Siberian irises now struggling along in deep, dry shade near the driveway. The Veronica can go into a spot a few feet to the west of its present location, currently occupied by a rather pushy Sedum that has taken over more space than it deserves. A small, sunny spot in the New Front Bed near Saponaria “Max Frei” is perfect for the Limonium, or at least can be made perfect by judicious removal of other things, keeping in mind that “Max” is a bit pushy when in full bloom.

Sometimes I think gardening is like running a hotel for the fussy and infirm.

On the other hand, there are plenty of plants that need “managing” rather than cosseting. One that does almost too well here is good old Lychnis coronaria, the Rose Campion. Now that I have time, I have managed to keep up with deadheading my dozens of plants, even though that means snipping off each faded flower individually. It helps that most of them are between knee and waist level, and I can get at most of the plants without acrobatics. But it is a seriously tedious task, one best done in a “Zen” frame of mind.

Another reliable plant that seeds prolifically is the California poppy, Eschscholzia californica (had to include that Latin moniker, of course!). Years ago, someone gave me a plant of the basic orange form. Then I bought seeds of a strain called “Thai Silks,” and a few years after that acquired seeds of a white or cream-coloured form. These have mixed and mingled, with bumblebees moving pollen around, so every year there is a different proportion of colours.

The only problem with these easy-going plants is that by mid to late July they lose their looks — floppy, too many seed pods, not enough flowers. The thing to do at that point is harvest some of the seeds by snipping off almost-ripe pods, and then cut the plants to within an inch or two of the ground. They quickly put out fresh growth and are blooming again in a few weeks, much to the delight of gardener and bumblebees. Oh, about those seed pods — when ready, they split and spew seeds all over the place, so put them in a glass or a jelly jar to contain the explosions.

And now, back into maintenance mode… 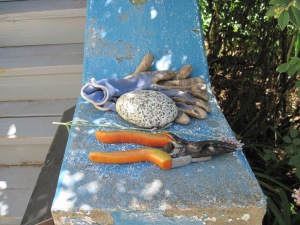 Tools of garden maintenance (except the rock, of course). 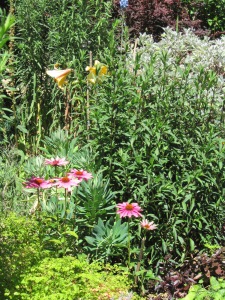