May is over, but here is a bouquet of sights from my garden gathered during that month. It was a great year for irises. Two managed to bloom that had not for years, probably due to shade and dry conditions. And I have blue poppies once more. I can’t take any credit for them as yet; if they survive the next winter to bloom again, I’ll have something to brag about. The mass of yellow bloom on the right side of the featured photo is a giant kale plant, almost a tree.

Here are four photos of the two blue poppy plants I bought a few months ago. Their labels call them Meconopsis sheldonii “Lingholm” (grandis).

I’m looking forward to June, but sorry to see the end of iris time.

The two main bloom spectacles in June are from roses and delphiniums. This rose is a type whose name is unknown to me but it’s obviously a tough one, since it grows between two Norway maples, slings itself into their branches and blooms with abandon. The flowers are very full, white with a pinkish tint, and fragrant.

Another rose that blooms hard in June is Rosa glauca (formerly Rosa rubrifolia), the red-leaf rose. The leaves aren’t really red, but a sort of blue-green with reddish overtones, quite unusual. The flowers are tiny and not much to look at individually, but a pleasing sight in quantity.

Delphiniums are in full bloom now, but I like them best when they are mostly still in bud, with just a few flowers open — great anticipation!

Mulleins have this effect too — their growth from rosettes of great big fuzzy leaves up to the point they burst into bloom is a prolonged event. Once in full bloom they are abuzz with bees.

A shrub I’ve had for years is finally living up to it’s name — Brachyglottis (or maybe Senecio) “Sunshine.” 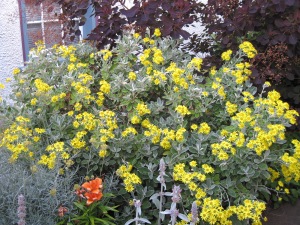 And we are having sunshine and the first really hot weather of the season (28 C), but there is sadness too because of the death today of our cat Zoey, who had lived here since 2000. She was a sweetie. The garden won’t be the same without her. 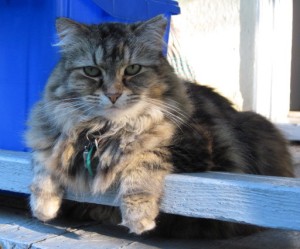