Most of the random garden photos I’ve taken lately feature the incredible colours of and patterns on the about-to-depart leaves of the smoke bush, Cotinus coggygria.

Smoke bush is a variable and versatile shrub. There is a form whose summer foliage is green, but most of the ones I see hereabouts are one of the purple-leaved forms. Mine is called “Royal Purple,” but there is a plant I’m acquainted with that’s an interesting red-green with purple undertones, and whose fall colour borders on lurid.

I took this picture with my phone; the colours came out a bit weird.

Smoke bushes may be handled in different ways in the garden. Left to themselves, they can become small trees — “small” meaning up to 20 feet tall, but they tend to be almost as wide, so you need a lot of room for an unrestrained plant. They take pruning well — anything from trimming last season’s growth by one-third in spring to cutting the whole bush down to stubs. Unpruned, they bloom in summer, putting out clusters of tiny flowers surrounded by pink fluff (the “smoke”). Pruned plants, obviously, don’t bloom, but some gardeners prefer the foliage to the flowers. Severe pruning — which is what I did to my plant last spring — results in really vigorous, whippy shoots. I found it necessary to do some mid-season trimming to keep the plant within bounds. I think I’ll stick to a more moderate treatment for the next few years. 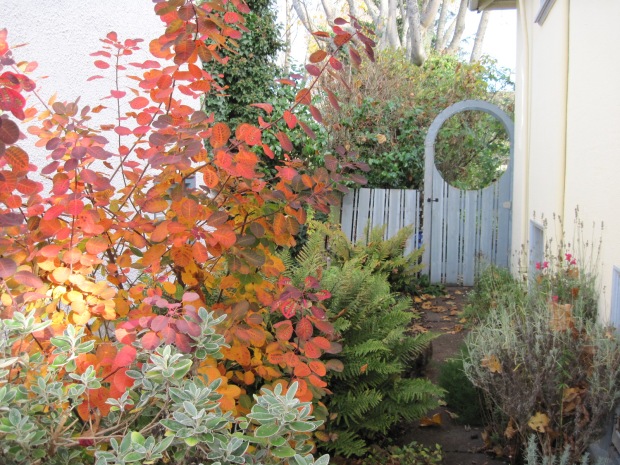 This plant was cut down to 2 feet in spring, and trimmed in summer, and still topped out at more than 6 feet, and 4 feet wide.

For me, the whole point of growing a smoke bush comes in the autumn, when it starts to change colour — everything from yellow through shades of orange, into reds and purples, and even some green emerging. Many leaves develop little brownish-grey marks on either side of the centre rib that turn them into little works of art.

Looks as though carefully painted.

More good features — smoke bush is drought tolerant and does well in light shade, although full sun brings out the fall colours best. It seems to be pest-free, although I think I read that verticillium wilt is a potential problem.

Smoke bush is a trouble-free, versatile shrub with much to recommend it. It looks good with other plants too.

Plant communities in nature go through something called “succession,” progressing through different groups of mutually cooperating plants until an optimal configuration is attained for the local conditions. This is called a “climax” plant community, be it a forest, a meadow, a prairie or a desert. Each wave of plants creates conditions favourable to the next wave, unwittingly sacrificing themselves for their successors.

It occurs to me that something analogous happens with gardens. I speak here of ornamental gardens, consisting mainly of perennials and shrubs. I have gardened in the same neighbourhood now for nearly 20 years, long enough to have observed the horticultural goings-on around me as well as participated in them on my own 50′ x 120′ patch.

A brand new garden always attracts attention. Sod is stripped, old, overgrown shrubs chopped down and their stumps dug up.  Sometimes new lawn is seeded or installed along with the new beds.  One day, there it is — perennials and shrubs turned out of their nursery pots and planted, looking young and eager. Each plant is sensibly distant from its neighbour and the soil is covered with a nice mulch of compost or cedar bark. Very nice. Whenever I see these new, freshly-made gardens, I feel a wave of envy and think I really should do something about my place, which has moved well beyond the young and hopeful stage.

Here’s what happens: some plants grow vigorously, others don’t. Some die. The gardener acquires new plants, which are fitted in among the originals. Eventually, perhaps, the gardener/homeowner goes on holiday, gets busy with other projects or persists in the deluded belief that planting is the hardest part and all that’s needed after that is to water occasionally and enjoy the show.

A few years down the road, many of those shiny new gardens don’t look so good.  Shrubs have ballooned, squeezing out the perennials between them. Self-seeders have colonized beyond the neat circles originally allotted to them on the gardener’s plan, overwhelming whatever more refined plants were nearby. Weeds have crept in, or, in the case of impossible-to-get-rid-of horrors like bindweed, made a triumphant comeback, first embracing the newcomers, eventually engulfing them.

In the worst case, a sort of “climax,” or more accurately, a final resting state is attained — the tough and hardy survive, the rest die out. By this time, the property may have changed hands and the new owners have had their way with the place, sodding over the failed perennial beds and whacking back the rambunctious shrubs. From garden to mere “yard” in a few short years.

The grand perennial borders of England are, as I understand it, regulalry reworked. Most of the plants are dug up, the undesirables discarded, the desirables divided if necessary and replanted in renewed soil. New varieties are added to replace outmoded ones or subjects that had failed to prosper. Instead of falling into decline, the garden is refreshed and begins anew. But only with copious inputs of time and labour.

Parts of my place are in need of this treatment. I should draw up a schedule for renewal, area by area, and carry it out over the next several years. A Five Year Plan: rip out the excess Lychnis coronaria and Campanula persicifolia. Divide those irises. Dig up the sponge-like layer of maple tree feeding roots and cart in fresh soil and compost. Select new lilies and hostas, hardy geraniums and variegated brunneras. Page through books of plant descriptions, make lists, get excited about garden-making again.